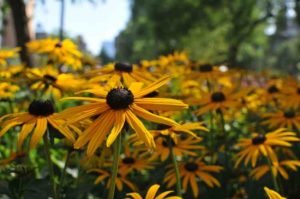 I wish people would stop banging on about us having Mediterranean summers now because of global warming. I do believe in global warming but the rises in temperature on average since the industrial revolution is less than 2 degrees, still devastating for the planet but  simply not detectable by humans in their tiny life times. Mediterranean summers indeed….have these people ever been to Spain! Anyway, I’m going off tangent…where was I…late summer colour…yes….when we look around there is loads of it. If properly looked after, exotic annuals and perennials will last until mid October, certainly in the south. Crocosmia, Japanese anemones, Helenium and Penstemon continue to fight the good fight amongst their fallen comrades. The mighty Dahlia sends out it’s crazy message in riotess colour, just when you thought it was time for that Autumn clean up they shine through like burning, dangling clowns against the grays and greens of the approaching season. Plenty of Marigolds still hanging in today too as I strolled through our local allotments ….Gawd bless ’em one and all. I’ve forgotten the name of that shrub that has purple flowers in the Autumn…hummm…my poor small brain…it’ll come to me.

Ranners and his high wire ants.