The Roman Goddess of Flowers. 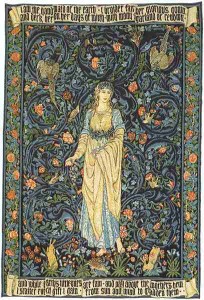 Who is the Roman Goddess of Flowers?

The lady’s name is Flora and she is not the margarine for men. She is also not merely the Goddess of flowers but indeed  of all flowering plants. The spring belongs to her and at this time she becomes a love Goddess with virtues of fertility, blossoming beauty and sexuality. She is probably pre-roman, the Sabines are said to have named a month after her which coresponds to the Roman month of April. 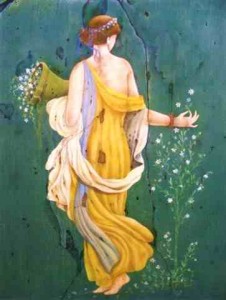 What did the Roman Goddess of Flowers do?

Her main function was to avert nasty diseases from attacking the flowering plants that would be responsible for providing the bulk of the autumn harvests and the Roman people would evoke her spirit to do just that. Wheat, an especially important crop was susceptible to ‘rust’ and Flora was brought in to dissuade it from taking hold. By protecting the crops Flora was one of the most loved of the Roman Goddesses.

Flora was able to grow a magic flower, which she gave to Juno and from which she was able to conceive without the help of a man. From this conception, Mars was born.

Flora had her own festival, the Florelia, held in April or May. It celebrated the circle of life and was full of drinking, flowers and plenty of ‘How’s you father.’ There is now a Florelia Festival in Wales.