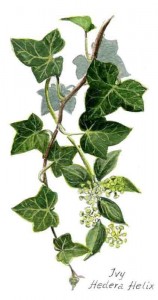 Why do we have holly and ivy in our homes at Christmas?

In midwinter it has been tradition to decorate our homes with holly and Ivy. The reason for this has long been forgotten by most…but not by my Aunty Flipflop who is 468 years old on Tuesday. She tells me that Holly was always sent with presents by the Romans during the Saturnalia festival in December. They believed it would ward of evil spirits. This too was a belief held by British pagans who saw holly also as the bringer of eternal life. It was thought that if holly was brought into the house that the good fairies could live in its branches, somewhat shielded from humans and help defend the house from those pesky bad fairies…seems reasonable to me. The Christians then came along and decided the reason they liked holly was because it represented the crown of thorns and the berries represented the blood of Christ…along with the crucifixion imagery this must have really cheered them up.

Ivy represented the feminine and holly the masculine, hence them being intertwined with each other. Like holly, ivy was seen as a protector and often churches were covered with it.

An ancient British tradition of The Holly Boy and The Holly Girl is somewhat shrouded in mystery. As far as I can ascertain a bunch of holly was made up by the lads and a bunch of ivy by the lasses…they then tried to steal the others bunch and throw it on the fire. It must be pointed out that they didn’t have any telly in those days. 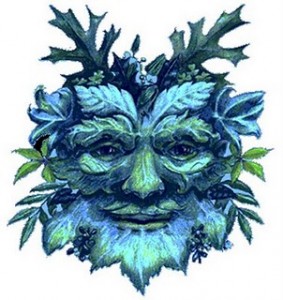 The Holy and the Ivy. Carol Lyrics.

Happily this tune goes right back before Christian times, it has been adapted of course and a few Jesusy bits added by Cecil Sharp. The original lyrics, now lost, described the battle between the holly and the ivy, male and female.

The holly and the ivy, when they are both full grown,

Of all the trees that are in the wood, the holly bears the crown.

Refrain:
Oh, the rising of the sun and the running of the deer,
The playing of the merry organ, sweet singing in the choir.

The holly bears a blossom as white as lily flower,
And Mary bore sweet Jesus Christ to be our sweet saviour

The holly bears a berry as red as any blood,
And Mary bore sweet Jesus Christ to do poor sinners good.

The holly bears a prickle as sharp as any thorn,
And Mary bore sweet Jesus Christ on Christmas Day in the morn.

The holly bears a bark as bitter as any gall,
And Mary bore sweet Jesus Christ for to redeem us all.

Frankincense and Myrrh The Green Man