Introduction to The Green man

There are few characters in English folklore that are as recognisable as our friend the Green Man. Even today the image strikes a deep and penetrating chord with most Englishmen and women but imagine a time when most of our Island nation was thick forest. Picture if you will this forest being the bringer of life, its where your food lived, its where your building material grows, its where your medicines lie waiting to be picked and its where your enemies hide. The fuel for your fires lies on its floor and the water you drink runs through its heart. The forest is everything. It is logical for a people living within this environment to develop a spiritual culture that would include spirits and deities directly related to its very fabric. Enter the Green Man. 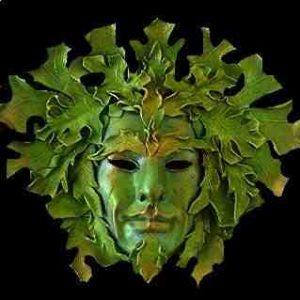 What does the Green Man represent?

The Green Man appears in different cultures and contexts all over the world and I’m sure the representations of him in England will differ in their meaning from one county to the next. However we can draw on some common ground and make some conclusions. ‘Regeneration’ would be the major keyword, in the uncertain world of the forest our chap the Green Man would offer a consistency. Mainly that the spring would follow the winter, that hope was always in sight. The powerful and watchful gaze of this spirit looked over his people and kept them from danger. Jolly good show Mr Green Man. It is because of this that our hero plays such a prominent part in so many rural festivals and celebrations. Most of these festivities in England happen in May and therefore support the idea that he represented regeneration and cyclical re-growth.

Some say he is the male counterbalance for mother nature, her own personal alpha male. 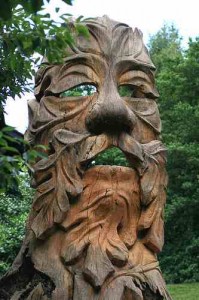 How is the Green Man represented?

Our green fellow is most usually represented as a face made up of deciduous woodland foliage or a human face masked by such. Later he was often displayed as a whole figure but the more ancient depictions were only the face. Sometimes the face is the face of a dead man with the new growth sprouting through his nostrils or his mouth. The image is often a sculpture carved in stone or wood. These are often found in Churches, which some say suggests that he was not previously a pagan figure but to my mind I can understand the early Christian’s using his imagery to help light the path way for pagans to enter the Christian faith, after all they did the same with pagan religious dates.

The images of the Green Man are still regularly seen in English culture, namely on pub signs up and down the country, including one just up the road from me in Thriplow, and jolly nice it is too

Subscribe to Higgledy Garden and have free updates & mind bendingly exciting posts sent to you before anyone else gets a look in. Click on the RSS logo at the top of the page.