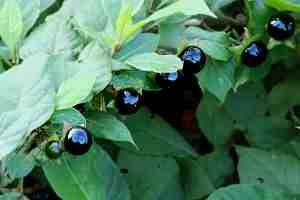 Deadly Nightshade is not so common as it used to be but it IS as deadly…{sharp intake of breath…little scream perhaps}…all parts of the plant are poisonous.

At Higgledy we don’t want a nanny state and we certainly don’t think you need to lose any sleep over the dangerous plants that may or may not lurk in your garden ready to temp your kids or worse your cat…but it IS worth knowing what Deadly Nightshade looks like.

Somewhat surprisingly it is a relative of the tomato and it is because of this that the tomato’s introduction to Britain took some rather good PR as the good folk of Blighty were very wary.

Uses! But you’ve just told us every part is poisonous! Indeed…but read on my dear friends…sometimes called Belladonna an extract of the plant was used in small doses to dilate the pupils of women in times gone by to enhance their beauty. Sadly this was often followed by vomiting, skin blistering and death…which wasn’t quite such a turn on to the chaps of the era.

How Poisonous Is Deadly Nightshade?

Children make up the biggest percentage of casualties and namely younger siblings whose elder brothers or sisters make them try it first before ingesting it themselves.

Symptoms may be slow to appear but last for several days. They include dryness in the mouth, thirst, difficulty in swallowing and speaking, blurred vision from the dilated pupils, vomiting, excessive stimulation of the heart, drowsiness, slurred speech, hallucinations, confusion, disorientation, delirium, and agitation. Coma and convulsions often precede death.

The approximate dose to kill an adult is three berries but less can be fatal.

Since (so I hear) that the berries are actually not unpleasant to eat, the parents of children in Medieval times explained to their kids that the Deadly Nightshade belonged to the Devil…and if you stole them…he would come looking for you…be prepared to meet him face to face.

When Jane Toppan took to using atropine as well as morphine during the latter part of her murderous career which was brought to an end in 1901, she may have been trying to disguise the pinpointing of the eyes that occurs with her morphine poisoning but, it appears, she was using atropine to counteract the morphine as she experimented to see how close to death she could take someone and still restore them, albeit temporarily, to life.