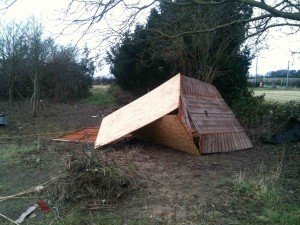 The first day down of a busy week. Plenty of early season general gardening work for clients, a smattering of child minding, couple of shifts cheffing and a good dollop of Higgledy Garden work.

Our shed blew away in the storm….which wouldn’t have been too disastrous but it blew into the greenhouse…which WAS pretty disastrous but also very funny…so we’ve lost several panes of glass and we need to find some timber to fix the shed…but hey…we’ve still got our looks. 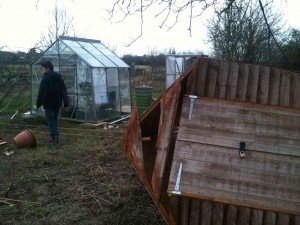 Work started with the turning of a super uber compost heap today which was full on but also a great early season treat of earthy smells and the promises of warm weather. Though it was a reminder that I’ve been pretty inactive over the winter and my limbs are whining at me now.

In the afternoon I started the final preparations in the cutting garden which lies close to a pair of rather fine walnut trees. It is a bed of approximately 4 meters by 7 meters. It doesn’t get the morning sun and am thinking about having it as a dedicated Nicotiana bed as they don’t mind not getting the sun all day. I love em too so a whole patch would be great…ok I’ll stick some foliage plants in as well.

Any suggestions for partial shade foliage?

Tomorrow will be some DIY on the shed…though I’d rather leave that to Big Al…as one, he’s good at that sort of thing and two….he’s being a lazy sod ever since he got his Play Station. {Yes Al…I do mean you!} Then some more digging over at the Railway Garden and preparing the beds for seed….yippie!!!!!!

Will post photos of shed as soon as Oli sends them over.

PS Jan from JW Blooms suggested Alchemilla…has anyone tried growing it from seed? I haven’t…though I have written a post about the little tyke…{Clickerty chip here}