I was delighted that my recent Calendula article was so well received by the digital world and has been shared through various social networking groups, resulting in huge numbers visiting the site.

One of those number was fellow calendula fan Carl Legge who has very kindly offered to share his calendula salve secrets with us. His site is full of wondrous things and I suggest you to take a moment to tootle over and have a read. 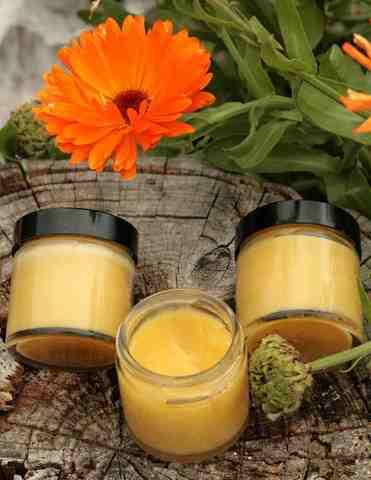 Well I’m not a Greek herbalist, but I am called Carl.

This marigold’s full botanic name is Calendula Officinalis. If we deconstruct the Latin it will tell us more about the plant.

In Latin, Calend refers to the new Moon. And so the Calends were the first day of each Latin month corresponding with the new moon. The first part of Marigold’s botanic name reflects the belief that it was always in bloom on the first day of each month. Certainly in the right conditions, it can be.

The Officinalis suffix tells us how it’s been used. In Medieval Latin Officina meant a workshop or store room. Later it referred to a herb store and then to a pharmacy. So the suffix is used for plants that have been used in the practice of medicine. And [see what I did there Mrs Williams?] as Ben says it’s been used by herbalists since ancient times. Marigold leaves were used in the American Civil War to treat open wounds. Today, you can buy it as Hypercal™ cream which is a mixture of Hypericum (St John’s Wort) and Calendula.

Modern research has failed to find precisely what the active ingredients of Calendula are. What is known is that it has a high concentration of flavonoids (the Latin flavus = yellow) which are plant based anti-oxidants.

So Calendula is known to have anti: allergic; inflammatory; microbial and oxidant properties.  This means it’s ideal for treating a range of cuts, abrasions, bruises, sores, rashes, ulcers and fungal conditions. An ideal way to apply it is to use a salve which is very easy to make.

These quantities made 540ml of salve which we put in 60ml glass jars; you can scale the recipe up or down.

You’ll need a double boiler (a smaller saucepan inside a bigger one works fine).

You’ll need some muslin and a sieve or colander with a bowl to strain the flowers from the oil.

Pick the heads from young plants preferably early morning on a dry day just after any dew has evaporated. This is designed to ensure the maximum active ingredients are in the oils of the petals.

Pick the petals off the flower heads and place the petals in the smaller of your two saucepans. Cover in the olive oil and give a good stir to make sure all the petals are well coated in the oil.

Put some boiling water in the larger saucepan and bring to a gentle simmer. What you are going to do is gently heat the oil/petal mix so that the active ingredients in the petals (which are oil soluble) transfer to the olive oil. This is called maceration. The simmering water will never come above 100°C and the gentle simmer will be less than this.

Place the smaller saucepan into the bigger pan and heat for 3-4 hours.

Take off the heat and strain the oil from the petals into a bowl using the muslin inside a sieve or colander. Squeeze the muslin to get the most oil out. The oil should have taken on the vibrant colour of the Calendula.

Put the beeswax chips into the oil and stir gently until the beeswax is melted and thoroughly combined with the oil. The beeswax will hep the oil set into a nice salve and has good soothing properties of its own.

Then carefully pour your salve into the glass jars and pop on the lids.

After a little while the salve will have set. Store your salve in a cool dark place.

I hope you find it useful. Happy gardening!

PS A note for Mrs Williams. The reference work on English Grammar is Fowler’s Modern English Usage. He says:

“And beginning a sentence. That it is a solecism [Ed – dodgy bit of grammar or usage] to begin a sentence with and is a faintly lingering superstition. The OED [Oxford English Dictionary] gives examples ranging from the 10th to the 19th C; the Bible is full of them”

You will be beside yourselves with joy and rapture when I announce to you we are dedicating a plot to medicinal herbs next spring. ‘Higgledy Herbals’ is born.

Hopefully Carl will be seduced back for another post before then.