Sunflowers, sweet peas and a packet of seeds! Guest post by the lovely Joan Armstrong.

A big thank you to Joan who emailed me this….it’s always great to hear how folk are getting along with their flowery adventures. Thank you for taking the time to write Joan. :) 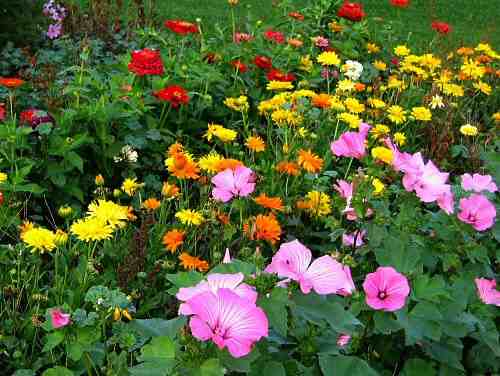 Over the years I’ve gardened in spaces that have been cultivated by nuns in the time of Henry the Eighth to sunless back yards with room for a few pots. My last move presented new challenges as I’m sharing with my neighbour who is also a much beloved sister in law.

So this year the plan was for me to take a strip along the edge of one of the beds in the walled vegetable garden and create a space for flowers.

The garden faces west towards the northern fells of the lake district in Cumbria. Think Blencathra and lots of rain.

Of course we had a late spring but that’s pretty much the norm here. We read advice in the gardening pages of the national press and add a month and sometimes more to our plans. We’re less likely to get early frosts in the autumn and you can be reasonably sure that the flowering season will keep on until late September or longer if we’re lucky.

My experience growing plants from seed is minimal and I wanted to keep costs down.

To create some interest in my 20 foot by three foot border I decided to erect three cane tepees. Not only would they support my plants they would create a border that could be seen from the flower garden and add a bit of interest as my colourful flowers burst into bloom. Just like in the pictures!

The sunflower and sweet pea seeds came free from a gardening magazine.

Unwins Sea of Pink mixed annuals and a packet of cottage garden perennials would fill the gaps between the tepees.

The sunflowers were a success, willingly thrusting themselves through the seed compost, bathing in the warmth of the west facing window.

Ignoring the leggy length of the sunflower plants I happily moved them somewhere cooler, sure, that with a little support from my canes they would do well once they were in the ground! Wrong!

The sweet peas meanwhile were growing rampant, strong enough to stand a period of readjustment under the garden seat before transplanting.

We have rabbits like other people have junk mail but I was sure that the plants were well hidden.  I’d forgotten the slugs who razored the plants to the ground in a night.

Much to my chagrin I had to resort to shop bought plants.

The sunflowers in the mean time had become much too leggy and were shown up by their two cousins from Dorset who found a home with me after outgrowing the space in their pots on a friends narrow window ledge.

The seeds meanwhile were sown directly into the soil. One packet were amazing. The clump of pink; poppies, cornflower, lavatera were a delight to the eye. The other packet sown at exactly the same time and under the same conditions failed to produce one plant.

The sweet peas are still flowering producing blooms for the house and friends a couple of times a week. The Dorset sunflowers were magnificent providing the bees with a great deal to do. The central tepee unfortunately was damaged as misfortune placed it between a rabbit and a gun!

Next years gardening plans are on the drawing board as the sister in law and I hope to create the bare bones of a massive herbaceous bed. I’m planning to reuse the tepees to fill in gaps and improve on my floral seed growing skills. Practice makes perfect after all.