A BIG thank you to Rose Mckerrell for taking the time to pen this guest blog post for me and stunning photos too boot!

Last year was my first attempt at a “Higgledy patch” and turned out to be the first time I had ever successfully grown annuals- apart from a few sparse nasturtiums and marigolds. The garden here is difficult. It harbours every pest known to science particularly the four-legged  cute and fluffy members of the Bambi and Thumper brigade. I also have the national collections of Ground Elder and Bindweed  and a mixture of clay soil run through with seams of mega-gravel which you have to take a pick axe to just to plant  a few snowdrops.  The plus side is lots of space, and  fabulous wildlife in abundance but for many years most of my growing was done in the safety of pots! Take home message: if I can grow a bed of annuals from seed- anyone can!

That was last year and I was well and truly hooked. 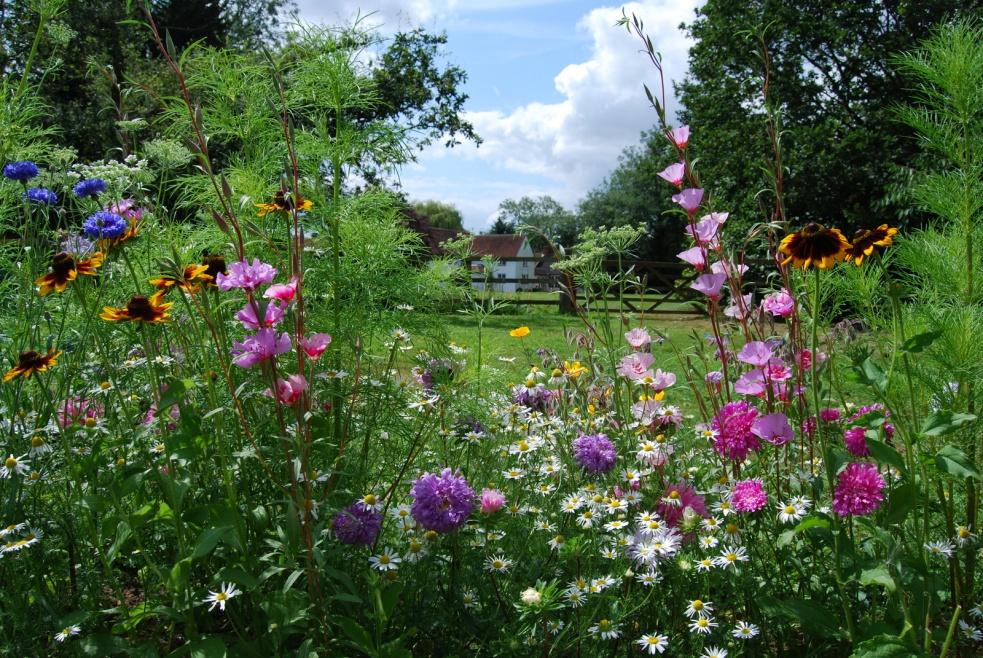 The original bed was created by rotavating (and most importantly) fencing a plot in an old sheep paddock. I used plastic mesh fencing on horse electric fence posts- not pretty and not permanent but it has worked. Three rows of mixed annual seeds from the Higgledy collection were interspersed with half hardys raised in the house then hardened off outside.  The display last year was awesome. Cosmos “purity” and “sensation”, Rudbeckia “marmalade” , Feverfew, Ammi, Eschscholzia Cornflowers , Calendula, Phacelia and Borage  all did really well  and the Godetia (“crown”) were just fabulous- tall spikes of lovely pink blooms. I thought I was a fan of the wilder simpler flowers but surprised myself by how much I fell in love with  the flamboyant Asters (“ostrich plume”)  in a range of  lush pastel lilacs and pinks.(They were my favourites! But say it quietly in front of the others.) Success was put down to following the excellent clear instructions from Mr Higgledy himself, beginners luck and the really good summer of 2014.

This year I would have been more than happy to recreate the same mixed meadow look, so I chose pretty much the same mix with some extras (Larkspur “imperials”, Scabious, Nigella, Cleome spinosa “violet queen”,  Cerinthe major purpurascens, Briza maxima and Nicotiana)  but as it turned out  the conditions this year were totally different.  So- far from recreating last year’s bed, this year had a character all of its own. Spring was cool here in Essex- so was summer- and we had some disappointingly cold nights and high winds. Autumn isn’t proving to be much better! But the annuals still came good and the effect was magical.

Early stars of the show were the Eschscholzia (orange king and ivory castle) and they were rapidly joined by the Cornflowers. This year was amazing for Cornflowers. All three varieties- blue ball , black ball and  classic romantic have just gone on and on and on….. 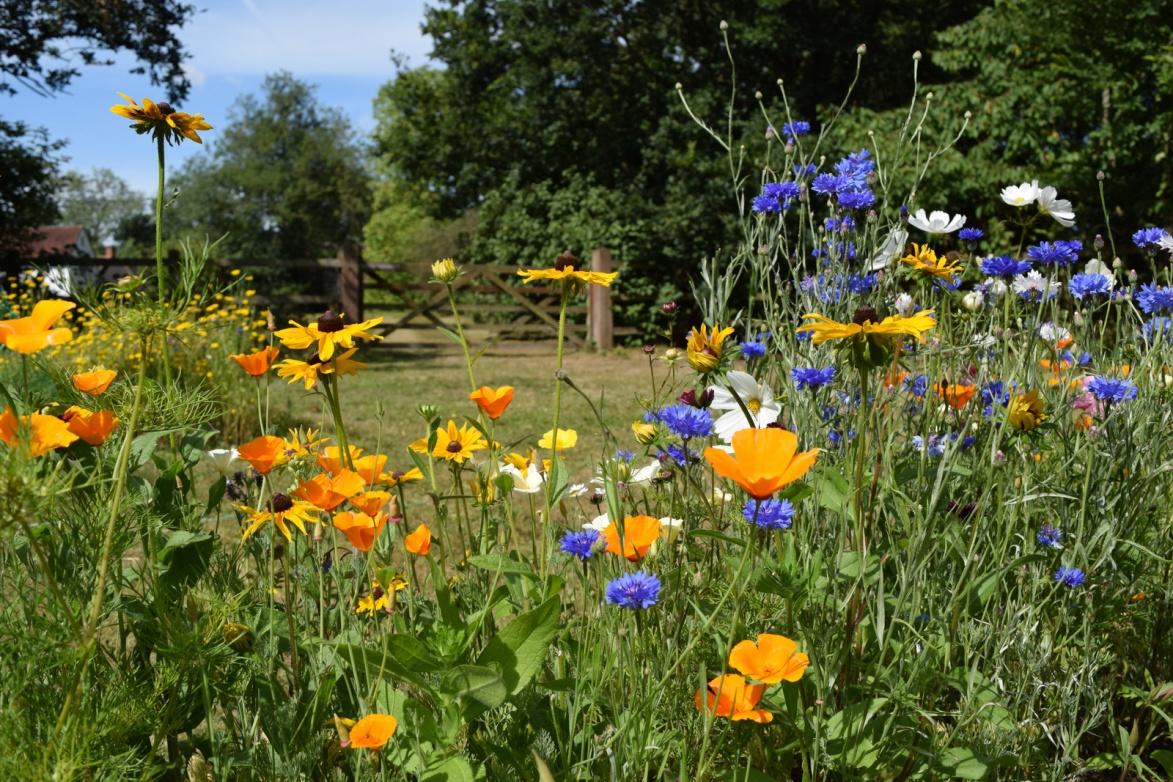 The Phacelia proved again to be a real hit with the wildlife. Bees and hover flies just love it and it is also a really pretty flower which photographs brilliantly. Borage was another early star which the bees enjoy- and it was worth growing these two just to see all those  happy buzzing little faces! 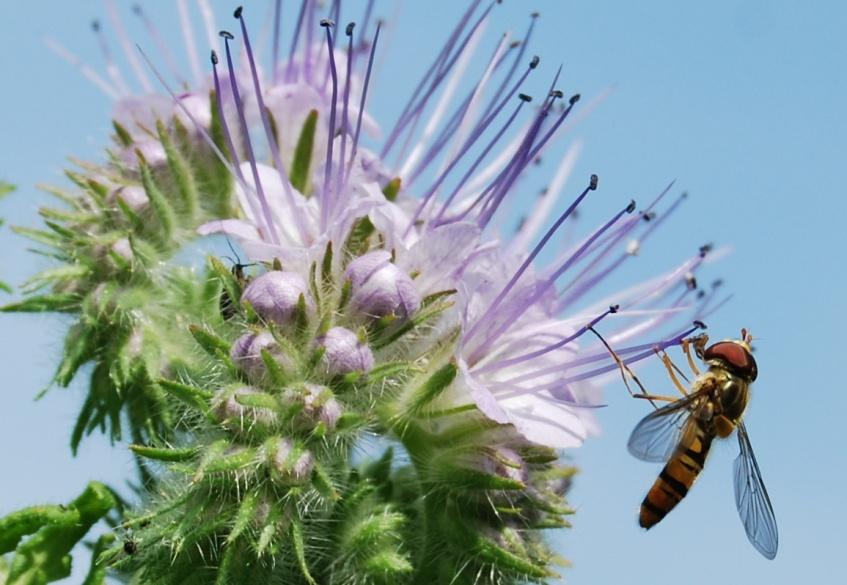 The Godetia germinated well but they didn’t grow nearly as tall as last year – I think they were waiting for summer! And the Scabious took their time but were such a treat when they arrived. Calendulas (art shades and indian prince ) did really well and the Rudbeckias were fabulous for the second year running – I planted two varieties this time “marmalade” and “Irish eyes”. The Irish eyes grew taller with fewer flowers and benefited from regular cutting as the later blooms were smaller and neater. Had a few nice surprises spring up among the Rudbeckias- a dark centred one which looks like the variety cappuccino and some really funky doubles! Love it when that happens! Will definitely try the third variety Mr Higgledy supplies(“goldilocks”)…. next year. 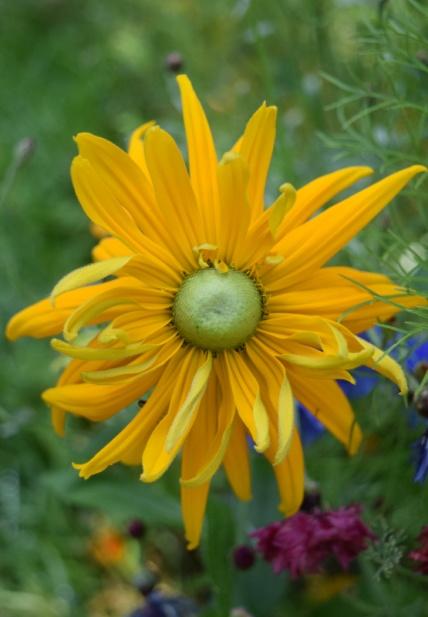 The Larkspurs were really lovely and survived being transplanted but I think they were a bit overawed by being in close proximity to the  extrovert Rudbeckias and Cornflowers and I suspect  they too were pining for some warmer weather. Next year I am tempted to have two beds- one for the pushy assertive types and a second for some of the more demure ones.  Nigella is supposed to be really easy (you know what I mean….) but mine seemed to get easily swamped out so they too might benefit from a bit of solitude, and the stunningly lovely Briza maxima (quaking grass) seemed to appreciate her space at the end of the bed. These have dried beautifully- a definite favourite and a slice of summer to keep through the winter. 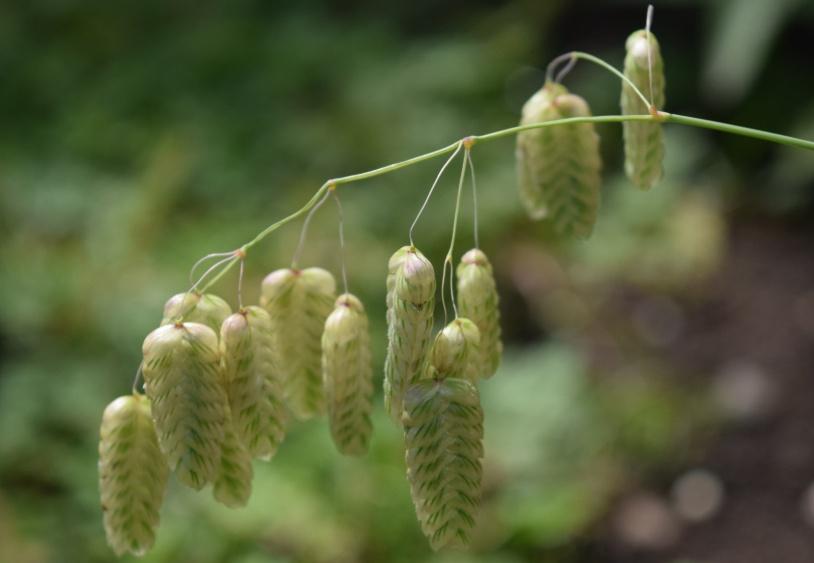 Cerinthe and Cleome (fabulous names -they sound like a pair of very glamorous twins) were new to me and I loved them both. Cerinthe grew well in the Higgledy plot but they also thrived in “captivity”. I planted up several in big pots and they did really well. I also really liked the exotic spiky Cleome- apparently not everyone does – the unusual blooms seemed to last forever and made a really great contrast with the more traditional meadow flowers. I experimented with some of the other annuals in pots (old habits die hard.) The Cornflowers and Scabious grew rather tall but flowered well- probably would have benefited from pinching out early on to make them bushier. The Asters were brilliant in containers but initially they did get attacked by pests (aphids and slugs) which just doesn’t seem to happen out in the wilds of the Higgledy plot, where nature takes over pest control and does a very good- job just as long as the rabbits aren’t allowed to get involved!

Lesson one: I have to man up and thin the seedlings a bit more brutally- overcrowding definitely didn’t help the Larkspur or Nigella. Most of them will transplant quite happily (Californian poppies are an exception) so they can be moved to fill gaps in borders etc which doesn’t feel quite so cruel! And it’s worth putting some in pots if you are up for an experiment. Gentle warning: potting Nicotiana in a container full of rich scrummy compost resulted in four foot tall Triffids! Beautiful Triffids though!

Lesson two: An azada is an awesome tool which means you can create a bed from scratch (ie in a field!) without the need for a man with a rotavator- (and I did it with a dodgy shoulder and a tweaky neck disc) A very good investment.

Top tips- if you don’t like cutting the poor little flowers off in their prime  ( I hate it- I prefer to take pictures of them ) you have to be even more rigorous about dead heading. Take off every dead flower head and your annuals will reward you with more and more flowers.

Advice ? Give it a go! Have loved my Higgledy plots and cant wait for next year’s. It won’t be the same as the last two – that’s for sure, but that is exactly what makes it so exciting. 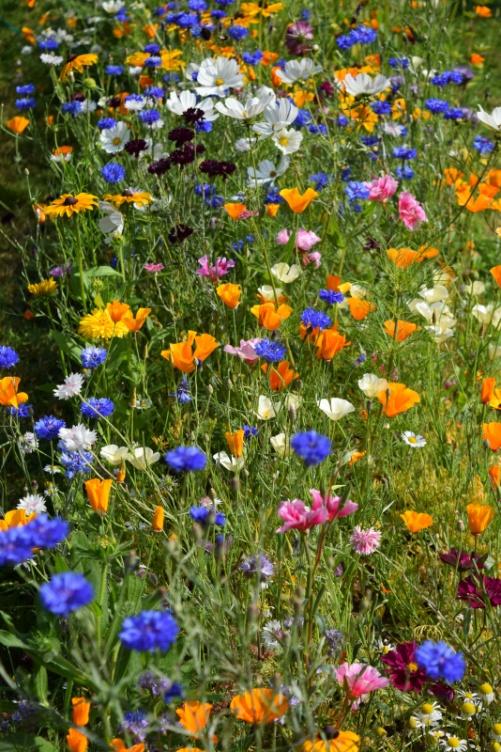 PS In fact I haven’t waited. Have planted up an autumn sown bed of hardy annuals and they are already popping up….  Yessss!!!…. 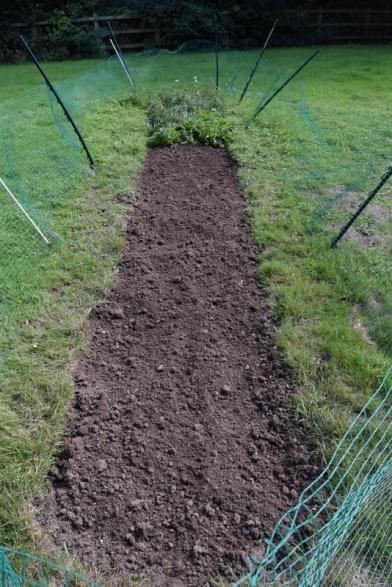