Ah Sweet Peas that quintessential summer cut flower what on earth is Ben from Higgledy Garden seeds talking about to be sowing them now!! Its heading into winter, we are all starting to hunker down, the heating is on, we have changed to the winter duvet, we are making hearty soups and Strictly is back. But don’t worry he’s not gone crazy, he knows his cut flowers does Ben. Now is the perfect time. 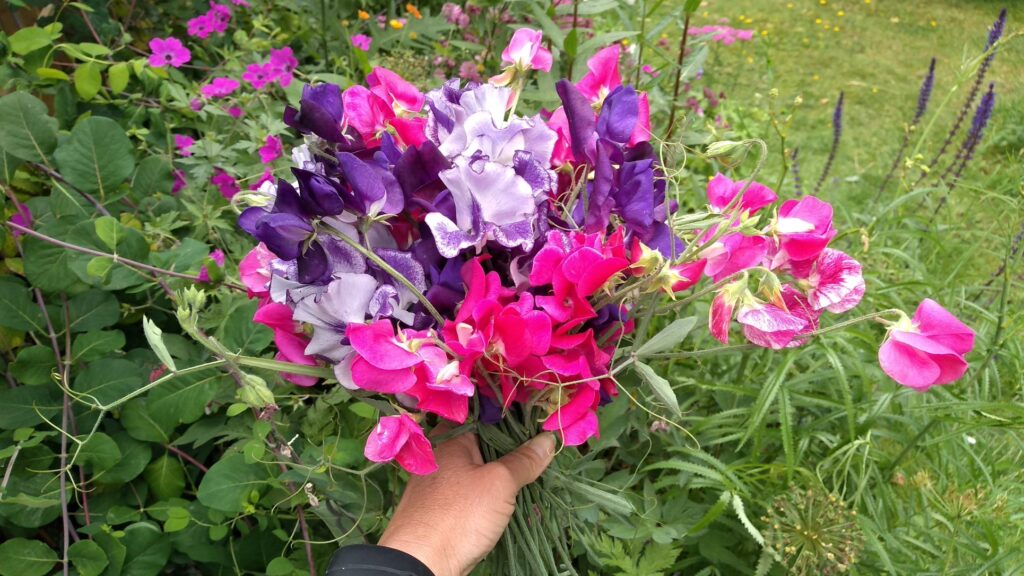 So why sow now? Well they will germinate quickly in the warmth and put a little spurt of growth on and then over winter, when it gets really cold, they will just call a halt on proceedings, just sit still and wait for spring. If they put too much of a spurt on early or if they get growing too fast in the spring you can pinch them out and they will make nice little chunky plants ready for planting in March or April. Last year I planted mine out on the 21st March, which is the earliest I have ever planted them. I had brought them out of the greenhouse in the daytime for a few weeks before to get them a bit hardier but I don’t have a heated greenhouse so they have been kept cold over winter anyway. You can always keep a bit of fleece handy for if it gets really cold, like a prolonged spell of frost. Sometimes once planted they may sulk for a week or so but mine just took off almost straight away. You don’t even need a greenhouse Ben grows his in plastic containers which just gives them that extra bit of shelter or a coldframe would be great. 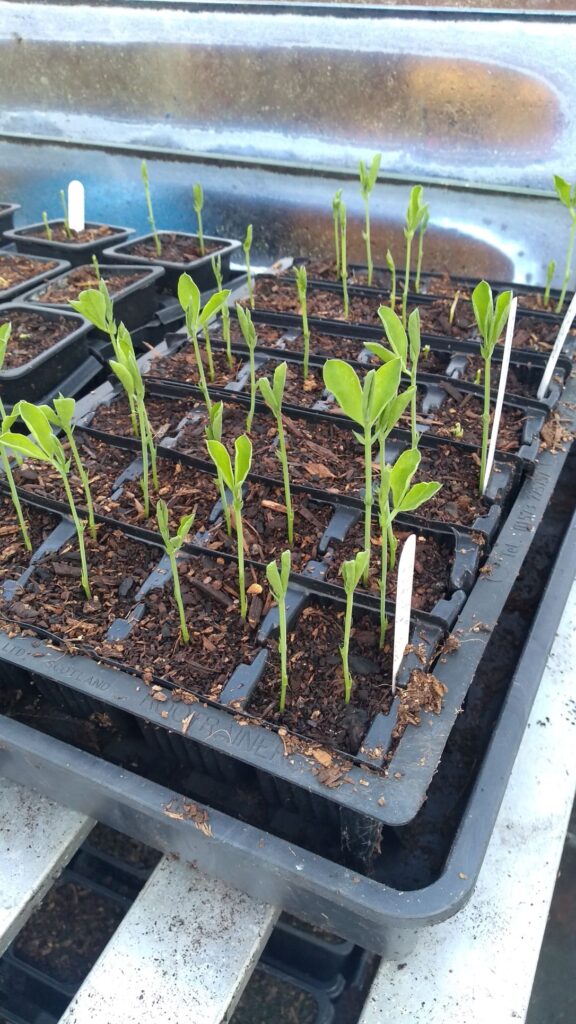 So I sow mine into 8cm pots or root trainers, 2 seeds per pot, using peat-free compost. Melcourts Sylvagrow multipurpose compost is perfect. Some people recommend soaking the seeds first but I have never found that necessary. I keep them in my unheated greenhouse though once they have germinated they could be kept outside in a sheltered spot. 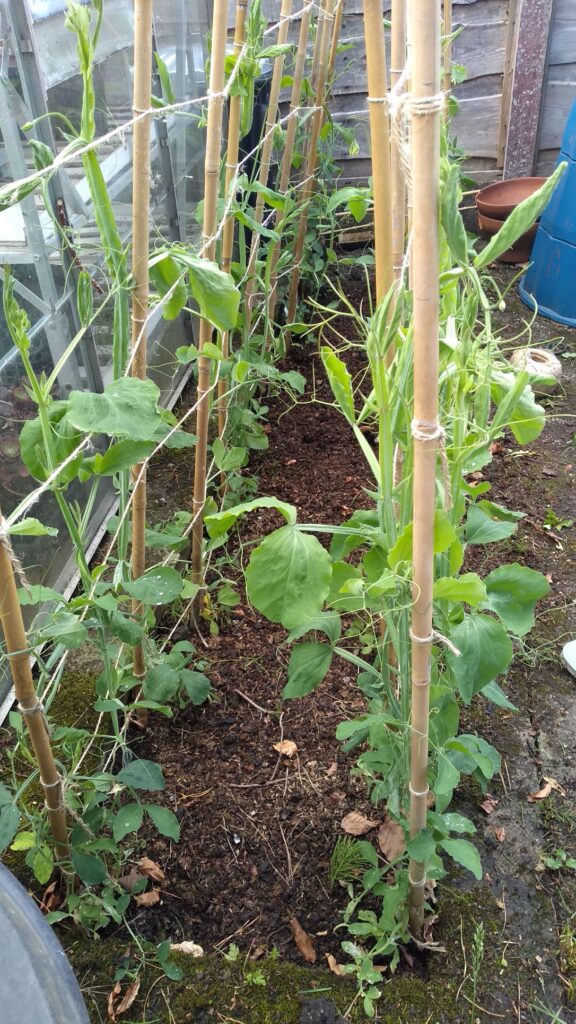 I have a small dedicated patch which I have used for the last 2 years next to the greenhouse. It is in a really sunny spot and I can really pile on the well-rotted manure. They are very hungry plants, and also need plenty of water and this spot is also right next to a water butt so great for easy watering. I also give a feed of diluted liquid seaweed over the growing season. Food and water are crucial for sweet peas which is why sowing them in the autumn is advantageous as you get them in early and that means they start flowering early before the weather gets really hot and dry in August (well it did this year). If you are lucky and the spring is good you can be picking them from June and into July and get good crops of cut flowers off them for months. When they start getting dry the plants are at risk to mildew and the flower stems get shorter and shorter. I’ve often found in previous years that they go through a bit of a lull when it’s very hot and then have another burst later in the summer. If you are very organised you can do a second sowing of sweet peas in the spring and these you can plant later for flowering later in the year. With the summers becoming so unpredictable it’s good to hedge your bets. 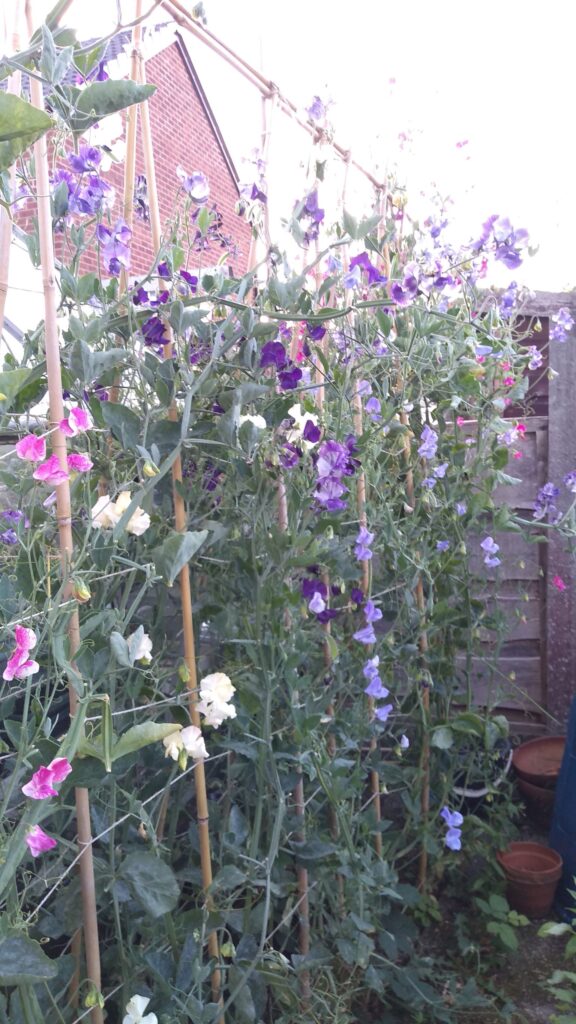 Last year I grew some Higgledy classics. Mammoth, Perfume delight, Jilly and Charlies Angels. But I also trialled a couple of new varieties Nimbus, Flagship and Annie B Gilroy.

I had my first flower on the 16th May (yes I’m sad I make a note of such things!) and was picking a small bunch by the end of the month. I was picking bundles and bundles for the house and as gifts and oh that perfume I don’t think it can be beaten. 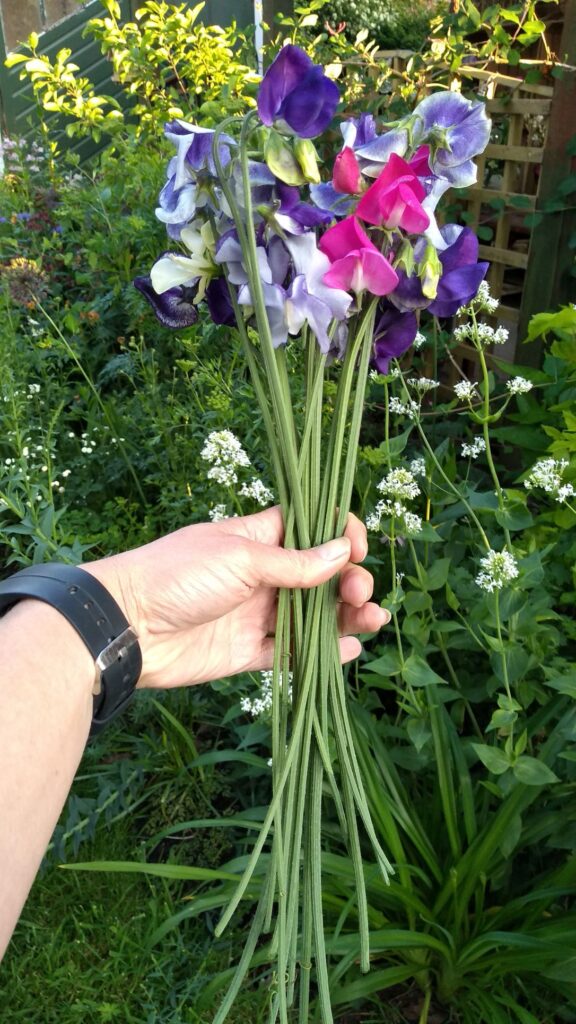 So this year I grew mine up a cane long tripod support with twine. It takes a while to set up but worth having a good sturdy support. It is recommended to remove tendrils as these can catch onto your sweet pea flower stems and cause them to bend, but it’s not essential.

It was a tougher year than normal for sweet peas once that really hot weather hit in mid-July. But with watering they kept going and I eventually cut them down at the end of August, which is such good value for a few packets of seed and a bit of time. 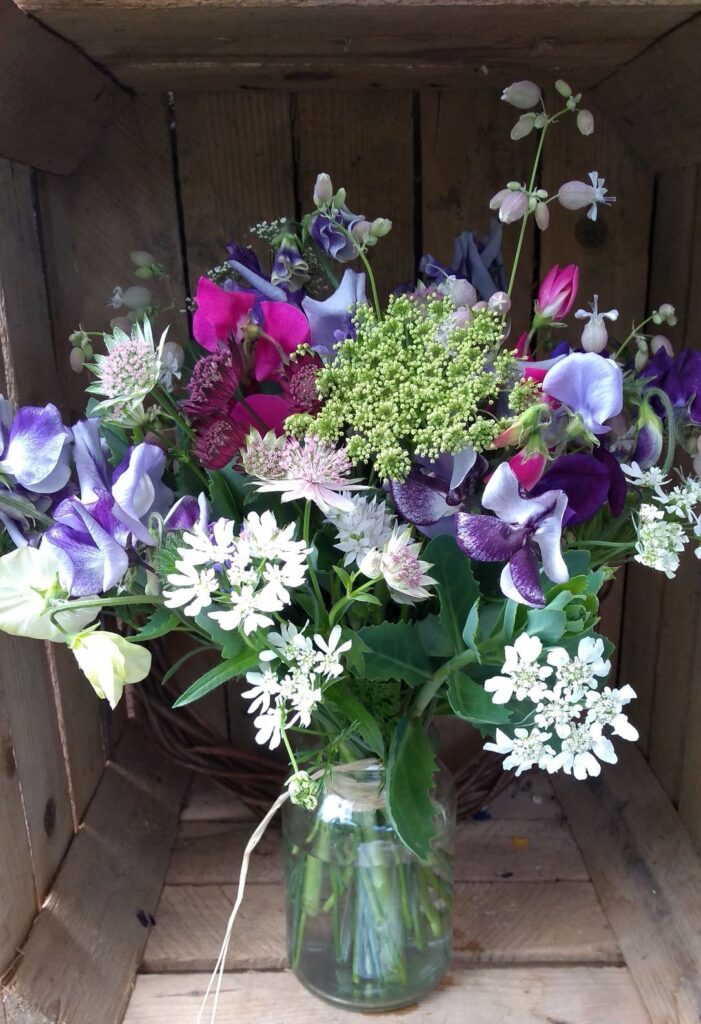 I grew a couple of mixes (Mammoth and Perfume Delight) which were fabulous.

Of the named varieties Jilly was, as expected, a real beauty, a lovely warm creamy white with long stems and good scent. 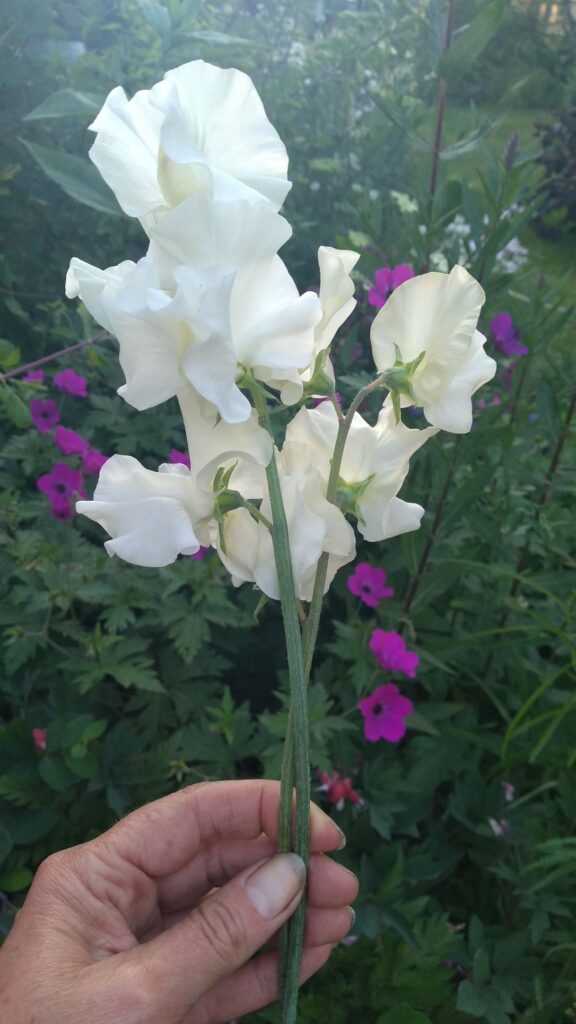 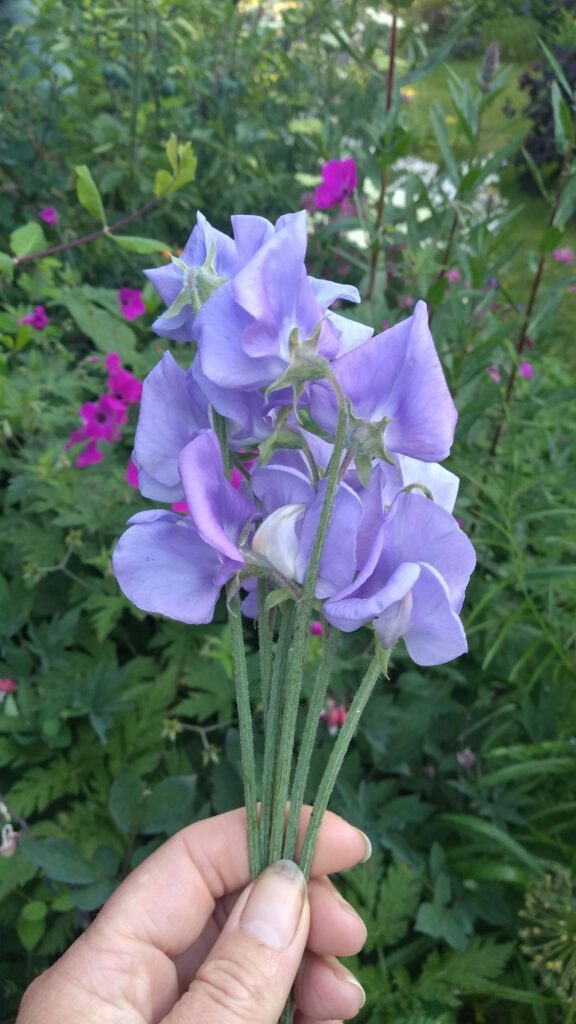 Of the new varieties I’ve grown I was especially impressed with Flagship which was a really dark purple-blue with very long stems. 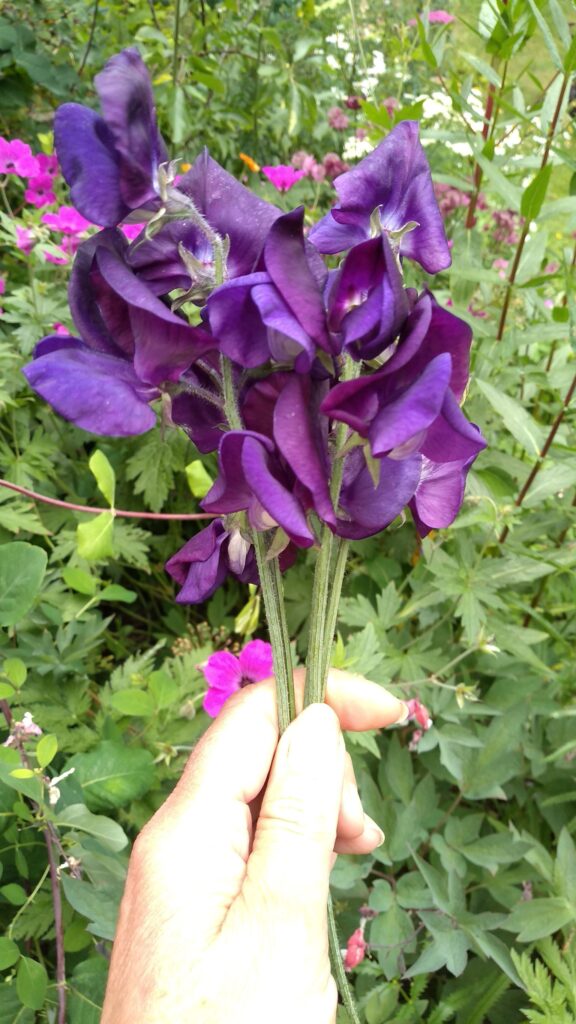 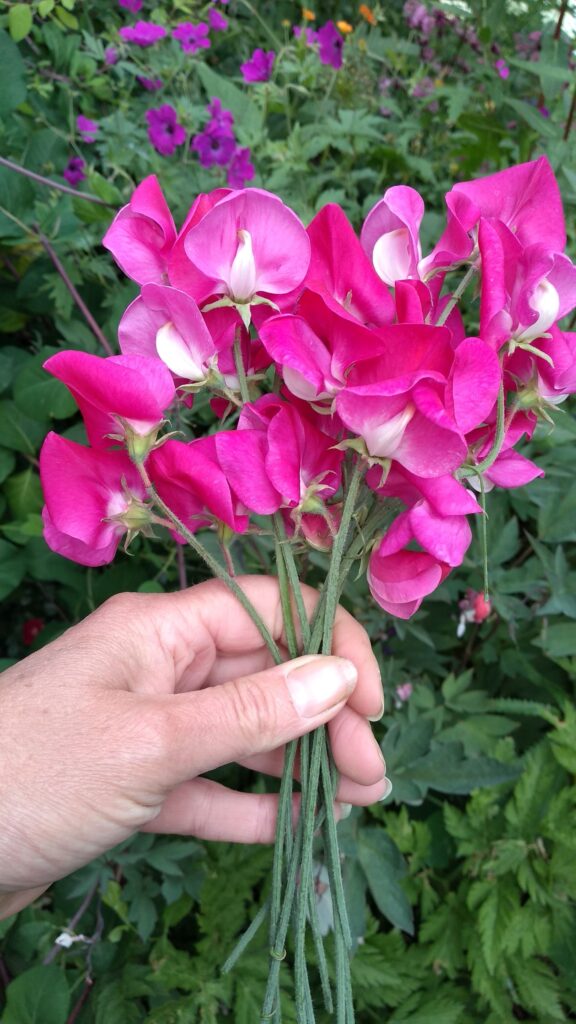 So I have just sowed my sweet pea seeds for next year, specifically I sowed them on the 8th October and a quick peek at them today and they are just starting to poke their green shoots out of the soil, how exciting is that!

I have sown the fabulous named varieties on offer from Higgledy Garden. Jilly, Charlies Angels, Winston Churchill, Beaujolais and excitingly Ben is now stocking Flagship and Nimbus so they are on the list too. Plus a couple of new varieties.

Hope that’s encouraged you to get sowing and Ben and I have put together a bundle of the best sweet pea varieties with 20% off.

Nimbus, Flagship which I can definitely vouch for and also a new one called Eclipse which is a vibrant pink to add to the Higgledy sweet pea colour range. Going to give that a go this year too. Please check out the range in the Higgledy garden shop.